In Valencia, there are two main kinds of public bus services, EMT and MetroBus. EMT buses operate mainly in Zone A, connecting the city centre with the surrounding neighbourhoods. You can see many of their red buses moving around the city every day. EMT has more than 40 day-time lines and 10 night-time lines.

On the other hand, MetroBus is an entity whose yellow buses, operated by different companies, are dedicated to connecting suburban areas and towns around Valencia. The 150 MetroBus lines mostly dwell in zones B-C and might include Zone A in part of their journeys. During your stay, you will probably stay in the city centre, so you are unlikely to take non-EMT buses, except perhaps for your trip to and from the airport (MetroBus line 150).

Regardless of the managing company, these lines share the same prices, however, not all passes are valid for both companies. In the relevant section of this article, you can find the full details on tickets and passes.

All bus tickets & passes in Valencia explained
A detailed guide to Valencia's bus tickets and passes. With info on all options, prices, validity, points of sale, travel advice, and tips.
Read more ->

Aside from these, if you want to travel between Valencia and other cities in Spain, other bus companies offer long-distance journeys. Alsa and Avanzabus , for example, have routes within the region and towards other cities outside the region too.

With the term urban lines we refer to EMT public buses which primarily move through Zone A, with occasional stretches of the route in the A-B overlap zone. They are the red buses you will surely see in the city centre.

There are 44 regular daytime lines making up a network that covers and connects the Valencia area nicely. On top of these, there are also other lines classified as special, as they are only active on particular occasions (like on All Saints Day), or on request.

In fact, EMT buses offer a door to door special service for people with functional diversity. This means that city bus services can be requested for a specific time and place outside the usual bus route and stops. The service is available 365 days a year, but to request it, you will have to call +34 963 158 525 at least two working days in advance. This telephone line is operational Monday to Friday between 8:00 am to 1:00 pm. Requests must be confirmed one working day in advance through a second phone call to the same number, same working hours.

In any case, the majority of buses with regular service in Valencia are fully accessible, with automatic and/or manual ramps to get on and off, as well as two wheelchair spaces with safety belts. Reduced fares might apply to accompanying persons.

Most EMT lines connect the historic centre of the city with some peripheral neighbourhoods around it. Here we will see some of the most useful ones for visitors.

Some of the bus lines that you are most likely to take in Valencia are:

Here is a breakdown of the most interesting stops for daytime buses (mentioned in the previous section). These stops often represent important junction points between different bus lines or methods of transport. To see and read about each of them, swipe left.

These are the 10 exclusively nocturnal EMT bus lines, and they all depart from Estació del Nord/ Xàtiva. During the week, they are operational between 10:30 pm and 02:00 am, but on weekends, this time is extended until 03:30 am. You will easily recognise them as they have an N before the number.

Remember that, unlike with day-time buses, single tickets bought on a night bus allow one transfer.

On top of these night lines, EMT line C3 runs all day and night. It isn’t of much touristic interest during the day, but at night it might be useful as there are fewer lines going around the city.

In Valencia night buses (plus line C3, which also runs at night) subscribe to the Purple Stops Program, Paradas Violeta in Spanish. This means that after 10:30 pm, women on a bus can request a stop wherever they want, as long as it is within the usual route of the bus.

This way, women who travel alone, with another woman, or with a dependent person, can get off closer to their destination. To request this service, you will have to ask the driver upon getting on the bus and sit down as close as possible to them, as you will get off the bus from the front door, instead of the rear one like usual.

*Line C3 runs all day and night. It isn’t of much touristic interest during the day, but at night it might be useful as there are fewer lines going around the city

Here is a breakdown of the most interesting stops for nighttime buses (mentioned in the previous section). These stops often represent important junction points between different bus lines or methods of transport. To see and read about each of them, swipe left.

MetroBus is an entity that incorporates several bus companies. Together, they operate the 150 routes that make up this service, all of them day-time lines. These buses move mainly in zones B-C, connecting smaller towns around Valencia to one another or with the city itself (in which case they also move in Zone A). They are easily recognizable as they are the only yellow buses in the city.

They use the same zone distinction and the same fares as EMT buses. However, not all passes or tickets valid for EMT buses will be valid for MetroBus services. This is because, as mentioned, most MetroBus lines cross zones A-B-C, while EMT buses remain in Zone A.

It’s also important to remember that neither the Bonobus nor theValencia Tourist Card is valid for MetroBus services.

Apart from bus 150 to Manises Airport, you won’t have much use for these lines, as they are generally dedicated to residents who live outside the city centre and need to move between towns.

In terms of luggage restrictions, you can take up to two suitcases with you on these buses, as long as there is enough room for everyone in the vehicle. Keep in mind that this is a city bus and not a coach bus, so your suitcases will travel with you.

Like most buses in the city, MetroBus lines will generally have two wheelchair spaces, and a manual or automatic ramp. For more details, you might want to check with the individual companies that run the service. In the case of line 150, you can check either on the Fernanbus website or call them (+34 96 150 00 82).

Line 150 makes a total of 26 stops on its way to the centre. Some of the most central in the city include the Central Market, Àngel Guimerà, and Avenida del Cid, all busy areas with many connection points and stations, both in terms of buses and metro.

The Mercat Central is the modernist central market in the heart of Valencia’s old quarters. Àngel Guimerà and Avenida del Cid are two great connection points for other buses or the metro, both located west of the city centre. If you would like more information about this line, you can check out our article about how to move between Valencia and the Airport. 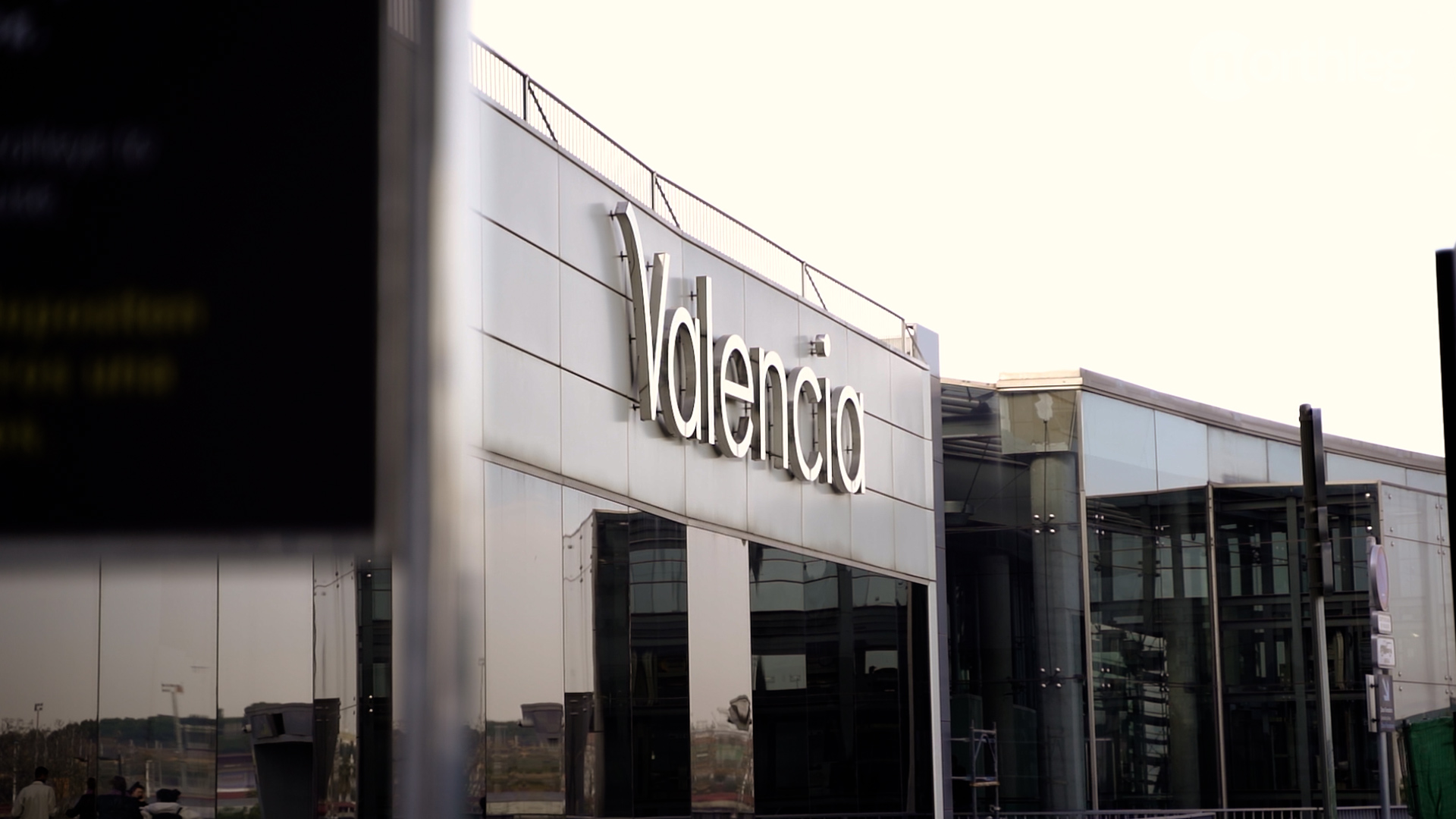 How to get to Valencia from the Airport
Valencia Airport, also known as Manises Airport, is the second-largest airport in the region after Alicante. The airport is only 8 km west of Valencia, making it the closest to the city centre.
Read more ->

If you want to go to another city in Spain, either in the Valencia region (like Alicante) or in other parts of Spain, private, long-distance buses might be what you are looking for. The two main companies for these services are Alsa and Avanzabus .

The prices of course vary depending on the length, date and time of the journey. It is also important to note that booking a return ticket is generally cheaper than getting two separate tickets. Even if you are not sure when to get your return, most companies allow changes to one leg of the journey for little extra cost.

You will find that most buses of this kind depart from and arrive at Valencia bus station, located in front of the Turiapark, not far from the Turia metro stop.

Some of the most popular destinations in the region are Alicante and Benidorm (especially liked by families). Other cities that are easily reachable outside the community are Barcelona, Madrid, and Murcia.

Introduction Tickets and passes
On this page
Introduction
Types of lines