Between urban and suburban routes, bus services in Valencia enjoy a network of 196 public lines. You will likely use some of these buses to move around the city during your stay, especially within and…
Definitive guide

Between urban and suburban routes, bus services in Valencia enjoy a network of 196 public lines. You will likely use some of these buses to move around the city during your stay, especially within and around the ancient city walls.

Between urban and suburban routes, bus services in Valencia enjoy a network of 196 public lines. You will likely use some of these buses to move around the city during your stay, especially within and around the ancient city walls.

The Valencian government has introduced a discount on multi-journey transport passes.

Bonobus tickets are brought down to €6.00.

Free public transport (metro, trams, and buses) is available in Valencia for people under 30 years old.

To benefit from this initiative, users have to request their free transport card online. The only prerequisite is a Spanish DNI or NIE as proof of age.

As a visitor, you will most likely spend a lot of your time around the centre, meaning the area within and immediately around the old quarters of the city. Valencia’s city buses, operated by EMT, cover this area much better than the urban railway network (trams and metro), as they can afford to move around with more ease. 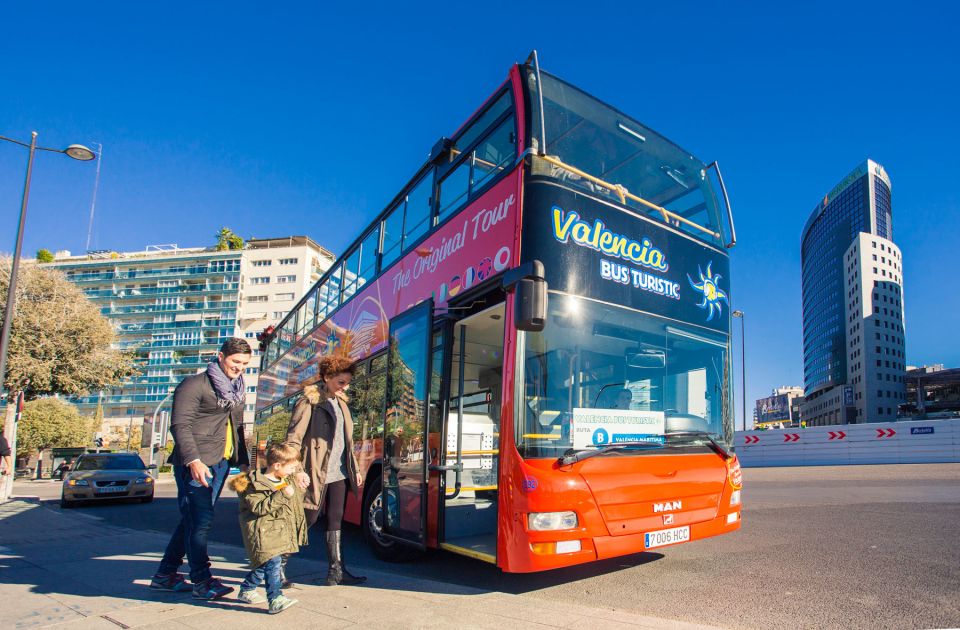 Hop-on Hop-off Bus Ticket
Explore Valencia in the easiest way, with 24- and 48-hour, hop-on hop-off tickets available to see the sights at your leisure.
Book now

Buses will allow you to get close to many points of interest that do not have their own metro stops. In this article, we will give you all the information about both urban and suburban bus lines in Valencia, how they work, tickets you can use, as well as useful tools to help you move around.

Obviously, as with any city, traffic congestion can sometimes slow down the service, but it is not as bad as other bigger cities in Spain. The service is in fact generally reliable and respects the run time.

We especially recommend taking the bus if you want to see Valencia as you go. This way, you can get acquainted with the city and get an idea of the different areas while you travel. You might even hop off in a neighbourhood you particularly like.

It’s also important to remember that a great way to orient yourself before you start exploring on foot, is to get on a tourist bus, which will cover some of the main sights around Valencia. On one of these Hop On-Hop Off buses, you will enjoy an audio guide telling you all the most important and interesting facts about Valencia’s main landmarks, all while you are being driven around the city.

Other great alternatives to get acquainted with the city are also to book guided tours, on foot or on a bike. We have even created our own selection of Northleg walking tours to help you discover Valencia.

For public transport use, the city is divided into three concentric areas (zonas in Spanish) and one overlap area. The majority of tickets and passes come in different zone-coverage options. Here you have an explanation of the different areas so that you can make the best choice with regards to your bus ticket.

The metro and tram in Valencia

From contemporary art museums to exhibition centres and workshops, to centuries-old …

A little hard to spot, off the beaten path, or maybe just not as well-known as other …

On this page
Introduction
Bus services in Valencia