Art collectives, pastel façades, bakeries, courtyard concerts and bohemian bars: this is Valencia’s hip neighbourhood. This is where you come to unwind on a sidewalk terrace after a museum tour.
Ruzafa

Ruzafa is much appreciated for its bohemian atmosphere and it is mainly frequented for its cool cafes and nightlife. Nonetheless, the neighbourhood isn’t lacking in traditional sights, like museums, historical buildings, and churches.

Plaza de Toros, also known as the Plaça de Bous is Valencia’s bullring, one of the most beautiful and largest in Spain. It is still active to this day, meaning you can see corridas and bullfighting events in it. It bears a strong resemblance to civil Roman architecture, particularly the Colosseum.

The Plaza de Toros is just next to Estación del Norte, at the northern edge of the neighbourhood, close to the Old Town (view map above).

If you want to know more about Valencia’s bullring, you can read our article about the Plaza de Toros. 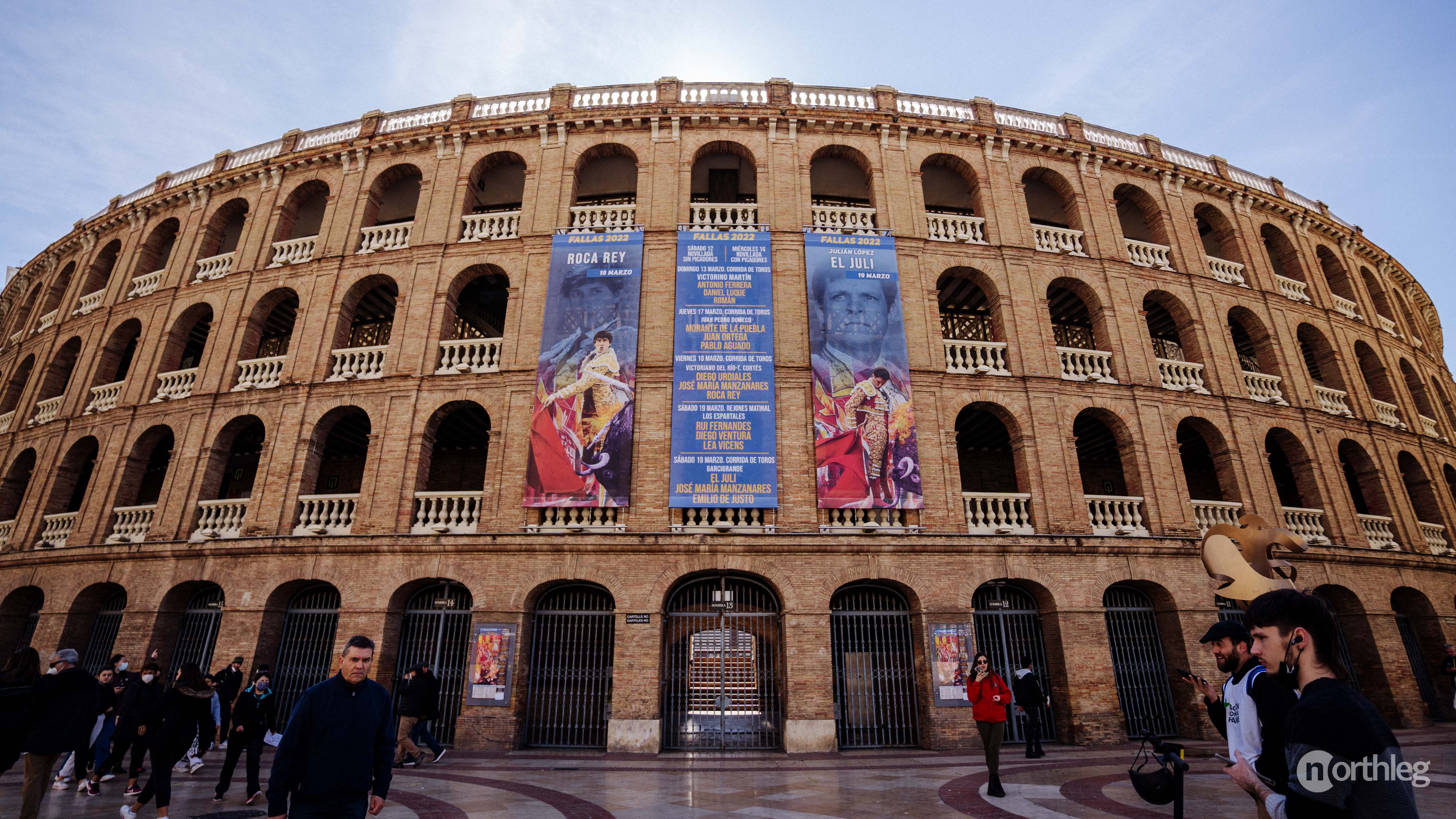 Plaza de Toros
At the edge of Valencia’s Old Town stands a Neoclassical temple of dust, sweat, and blood. This 19th-century bullring is home to one of the most controversial Spanish practices.
Read more ->

Valencia’s North Station is the city’s main train station, as well as one of the city’s most recognisable Modernist buildings. Dating back to the early 20th century, the station is considered to be one of the most beautiful in Spain.

The North Station is characterised by delicate and meticulous decorations, depicting the local landscape (the Huerta), agricultural traditions, and folklore. The natural curves and shapes of plants and flowers coexist with the use of modern materials, like glass, iron, and ceramics.

Estación del Norte is just next to Plaza de Toros, at the northern edge of the neighbourhood, close to the Old Town (view map above).

If you want to know more about Valencia’s main train station, you can read our article about its history and architecture. 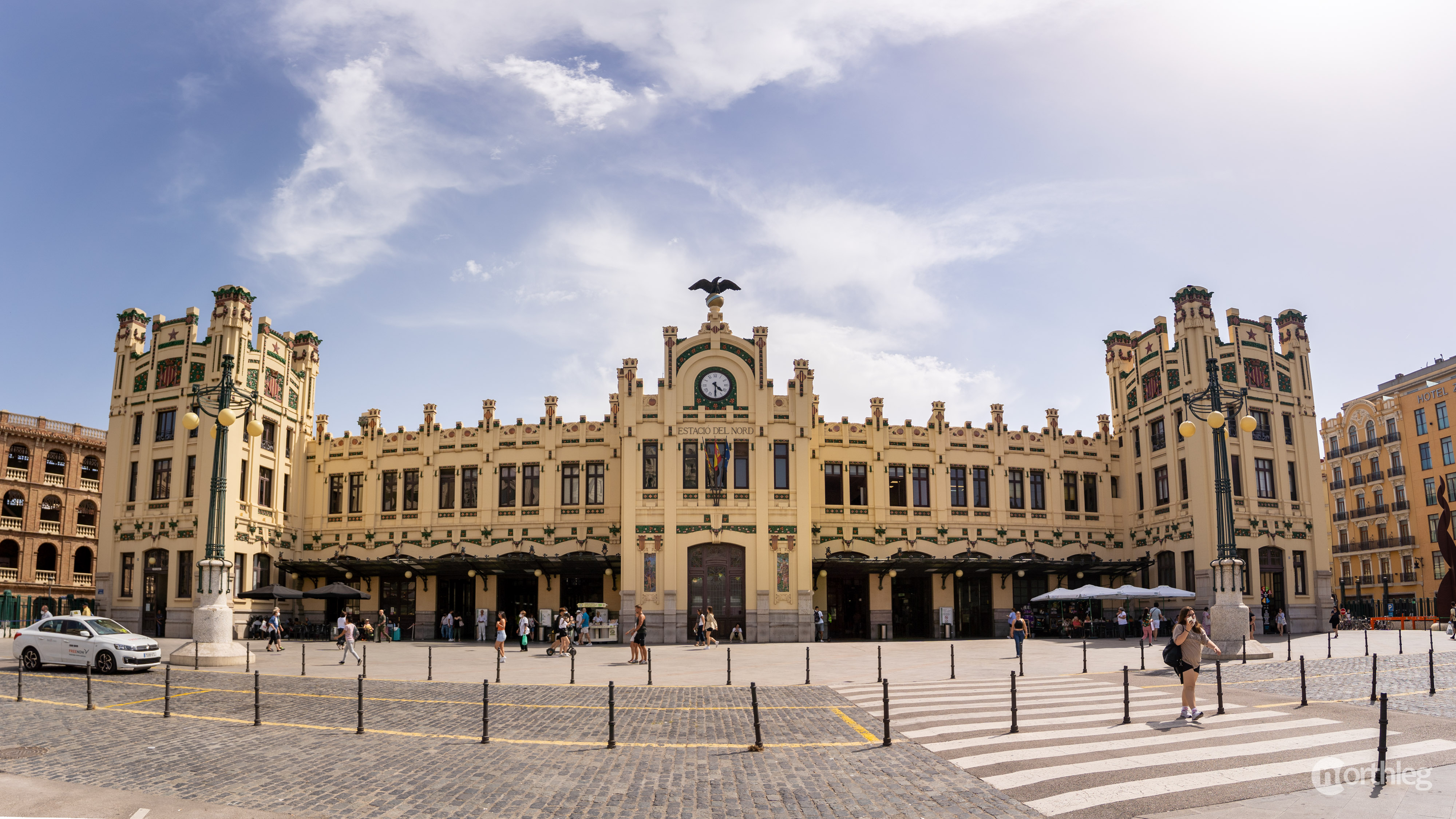 Estación del Norte
The North Station is one of Valencia’s Art Nouveau landmarks and a sign of the city’s 20th-century expansion, while still maintaining its ties to local traditions and the Huerta.
Read more ->

Commonly known as the Church of San Valero, this building is considered the Cathedral of Ruzafa. It was built, like many other churches in Valencia, on the site previously occupied by a mosque.

The initial church was destroyed by a fire, rebuilt in the 15th century, and then rebuilt again in the 17th century to allow for an expansion.

As a result, the building we see today is a Baroque church built in brick and stone, with a dome covered with blue and white tiles. The interior is Churrigueresque, an extreme form of Baroque which became typical in Spain after the colonisation of the Americas. On the façade, you can see the sculptures of the two titular saints: San Vicente and San Valero.

The church is located in the heart of the barrio, across Mercado de Russafa (view map above). In fact, many describe the neighbourhood as having developed around the church itself.

The Casa Judía (which translates to Jewish House) is a hidden gem of Valencia. Despite being on one of the main streets that connect Valencia’s North Station with Ruzafa’s centre, the building is not very well-known. You can find it near Plaza de Toros, on Calle Castellón (view map above). The construction, its explosion of colours and its unexpected lines force bypassers to look at it in awe.

The property, which unfortunately can only be admired from the street (it is privately owned), is one of the most unique buildings in Valencia and it hardly fits into a defined architectural canon. With its colourful and eclectic façade, it shows Valencia Art Deco influences.

The reason for its name can be found among the geometric shapes and the green, yellow, and light blue lines: a Star of David. The reason for it is unclear, but according to some sources the architect Juan Guardiol wanted to honour the initial commissioner’s Jewish origins.

A night of bonfires, where almost 800 sculptures are fed to the flames. The Cremà is much …

On this page
Introduction
Sights