The Paris Catacombs are one of the world’s largest ossuaries, containing impressive underground arrangements made of human remains.

The Paris Catacombs are one of the world’s largest ossuaries, containing impressive underground arrangements made of human remains.

Once the site of the city’s limestone quarry, the Paris Catacombs are an underground ossuary, estimated to hold the remains of more than six million people.

Since the spaces inside can be cramped, the site only allows a certain number of visitors at a time. For this reason, we - and the Catacombs’ management itself - advise getting your tickets in advance .

Bring comfortable, warm clothes and only a small bag.

The circuit is 1.5 km (0.9 miles) long, with 131 steps going down and 112 coming back up. The average temperature is 14°C and the inside of the Catacombs is normally rather humid.

Due to the limited space available in some sections, you can only carry bags that measure up to 40x30 cm (16x12 inch).

Inside the Catacombs, you’ll see, in what could be described as a grotesque but nonetheless impressive spectacle, constructions and arrangements made of hundreds of human skulls and bones.

In the 18th century, after the site had already been used as a quarry for centuries, local authorities decided to repurpose it as an ossuary. This was due to the poor sanitary conditions and structural problems created by the overflowing cemeteries in the city. In particular, the closing of the Saints-Innocents cemetery in 1780 sped up the decision-making process.

The site, up until then known as Les Carrières de Paris (the quarries of Paris), was consecrated as the Ossuaire Municipal de Paris (Paris Municipal Ossuary) in 1786. From that time onwards, it came to be known as the Paris Catacombs, in reference to the Roman Catacombs. 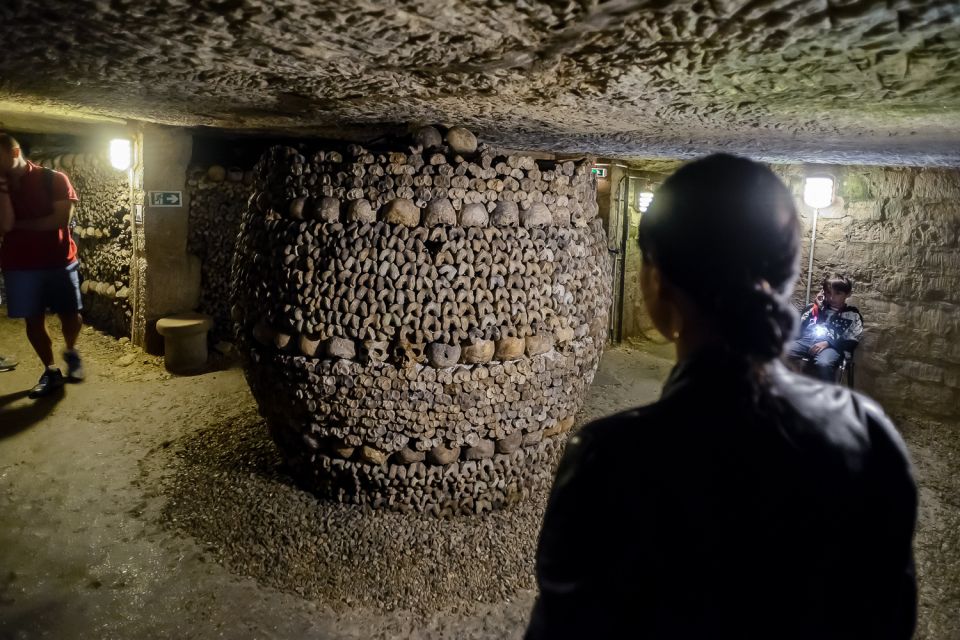 Only 200 people at a time are allowed inside Paris’ Catacombs. For this reason, the establishment requires its visitors to reserve their tickets beforehand. You can get your ticket, which includes an audioguide, here . If, instead of an audioguide you want a private tour guide, you can book your ticket here .

Last-minute tickets (same-day booking) are occasionally available for reduced prices: €15.00 for an adult, €13.00 for 18-26 year olds, and free for minors. This depends on availability on the day and is never possible during the summer months.

The counterpart to Disneyland Park, the Walt Disney Studios Park offers a huge range of …

On this page
Introduction
Paris Catacombs